Intrusion detection system (IDS) is a mechanism to classify the abnormal users from the normal users based on their activities with the warning system. In general, all the web-based information has the threat of intrusion attack while data processing and transmission. So, the current system requires an efficient security system, this gradually increases the growth of intrusion detection systems. Although we have many security applications, IDS is essential to protect all the layers of the system.  This page is about the more innovative ideas for Intrusion Detection Projects with major network attacks!!! 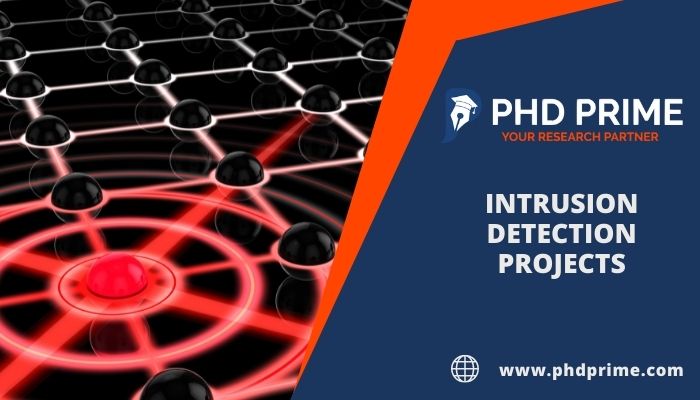 Now, we can see how the intruders are detected from the network. At first, this system monitors the network and analyzes its traffic. If there is any abnormal actions are detected in the network while passing data then it is notified to the corresponding authority/user with the details of the illegal activities of the intruders. To the great extent, it also identifies the other malicious attacks in the network to normalize the flow of transmission without attacks. Below, we have listed out the common important approaches for detecting intrusion.

Now, we can the process of IDS. As we know already, IDS is the primary process to normalize the data in the network by preventing attacks. In this, if the malicious activities are identified in-network observation, then it is taken to the application layer for further inspection to check whether it affects the system or not. Also, there are several tools to detect and track network anomalies for protecting user information. IDS is the passive technique to capture anomalies through the incoming network traffic. Here, we have given the IDS’s general workflow in their system design.

For more clarity, now we are going to explain in detail. The data collection module has the responsibility to detect malicious actions in the network. For that, it collects all the possible inputs from the system and looks for the abnormal behavior in communication. Then, it detects the abnormalities at the initial stage itself.

Similarly, the analysis module has the responsibility to inspect the nature of the abnormalities that is whether it is harmful or not through several intelligent techniques. Through learning approaches (ML and DL), it examines how the data are transmitted between the devices in the IoT environment. Further, these learning techniques can forecast future attacks by learning the history and context data of the earlier systems. Further, we have given the different methods that we can use for developing intrusion detection projects. It is classified into data sources, response, analysis, infrastructure, time-based detection, and system design.

Next, we can see the different techniques for intrusion detection in the internet of things environments. In this, we mentioned several machines and deep learning techniques based on supervised and unsupervised learning classification.

Similar to other security systems, IDS maintains the log information and sends the alert to the respective users regarding the existence of the attacks. The IDS logs are comprised of the following information to assess the IDS performance.

To execute the data verification processes, it involves some challenges faced by the intrusion detection system. And, they are listed below for your reference.

Now from the development point of view, we can numerous datasets that are used for developing intrusion detection projects. Choosing the best dataset is also equally important to research and development. The effective dataset yields the best results in classifying the normal and anomaly activities in the network

To the end, now we can see about the performance assessment metrics used to measure how the intrusions are classified into normal and abnormal through the pre-defined models in the IDS. For that, it uses the confusion matrix which reveals the true value of the IDS in the following aspects,

– Capability to detect the non-intrusive action

Competency to detect the actual intrusions

– Wrongly detect the intrusion as normal

Generally speaking, if you are looking for the best research service and more creative project topics then communicate with us. We will help you to know the latest trends in intrusion detection projects.