Named Data Networking (NDN) are a feature of the next-generation internet and network infrastructure that enables the scalability of content management, movement, privacy, and reliability, and also provides accessibility of data regardless of its location.  This article will provide you with a complete picture of named data networking for IoT applications. Let us first start with the basic understanding of NDN supports for IoT . 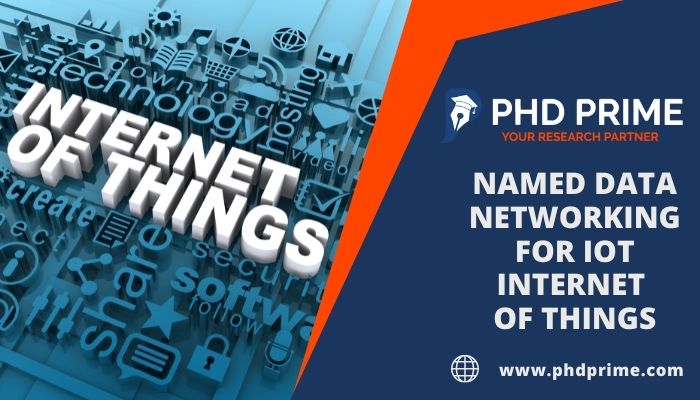 How does NDN support IoT?

In this way, Named Data Networking supports the internet of things. We have been working with NDN and IoT combinations since their origin. The research and development team with us is highly capable of designing appropriate infrastructure using Named Data Networking for IoT. In this regard, we provide the architecture of NDN – IoT systems below.

Prominently the internets of things applications include smart grid, smart cities, home automation, and smart healthcare systems. Whatever is the application the basic architecture of NDN – IoT systems remain the same

These are the IoT – NDN components that find applications in a variety of devices including cars, computers, wireless connections, printers, scanners, and all home appliances. With many successful IoT project completions, we have gained exceptional field knowledge and Research experts are ready to share them with you to support you in your project. Let us now look into the important elements of NDN

In order to get a complete understanding of various perspectives and the related NDN components, get in touch with our expert team. Let us now have a look into a taxonomy of Named Data Networking for IoT infrastructure

Taxonomy of NDN based IoT

The Named Data Networking for IoT functionalities can be better understood using the real-time implemented projects. So for a complete picture of the taxonomy, structure, and working of NDN – IoT you can reach out to us at any time.

Since NDN is such a new field of study, there is a lot of room for technological advances to be developed. Nonetheless, applications for diverse network contexts are needed to investigate NDN advantages like multicast, in-network caching, smart and stateful forwarding, scaling, and the ease with which applications can be developed and deployed. In this respect, the following research areas in IoT gains significance in NDN

For significant and benchmarking references related to these topics of research, you can surely get our support. We are sought by researchers from all parts of the world for our ultimate research guidance including topic Selection, paper publication, writing codes and algorithms, and many other aspects. Let us now talk about privacy in NDN – IoT

Content properties are clearly provided in NDN because it works directly with content names (CNs). As a result, as stated earlier, content safety and confidentiality are challenging issues. We have provided comprehensive data about the safety and privacy of NDN in IoT in the following.

We have proposed innovative and reliable technical solutions for solving these issues pertaining to different layers of Named Data Networking for IoT projects. Get in touch with us to know more details on how we handled these issues efficiently. Let us now talk in detail about the security schemes involved in IoT design.

Furthermore, while all intermediate nodes in between user nodes and the service provider have access to the customer’s information requirements, an intruder can trace private data. Finally, protection, information protection, and security remain unexplored areas in NDN. Other security solutions are as follow,

Your search for reliable information on such security methods might become hard as hardly any authentic research and implementation data are available on these. So in order to have access to benchmark references from top research iot journals you can really reach out to us. Let us now look into Named Data Networking for IoT simulation

Simulation analysis of NDN and IoT

Simulation plays a key role in any project related to IoT, as performance analysis beforehand entails the research to the next level. Let us now talk about NDN supports for various platforms of IoT.

Apart from the above platform, we gained enough potential to work on any advanced architecture. Our technical experts are here to offer you complete support on all project topics related to NDN – IoT. Let us now talk about the various IoT testing scenarios.

In recent times, we have delivered a series of successful projects of IoT simulation. Get in touch with us to know the different testing scenarios that we worked in and also you can get all your doubts related to it cleared from our research experts. For a detailed insight into Named Data Networking for IoT System let us have a look into a case study.

Case studies for NDN and IoT

Similar to the above scenarios, NDN is used for many more real-time implementations. In order to better understand the working of NDN-based internet of things applications, we will provide a better comparative analysis on various successfully implemented projects of ours. Let us now have a look into the parameters for evaluation of various network models in NDN IoT,

We highly insist upon obtaining the most perfect results with respect to these parameters and as a result, we have registered huge success in all projects of Named Data Networking for IoT that we guided to date. We emphasize the need of conducting an extensive study in order to turn fresh ideas into reality. We will provide institutional and professional project support. Reach out to us at any time to get the advice of world-class certified research experts.